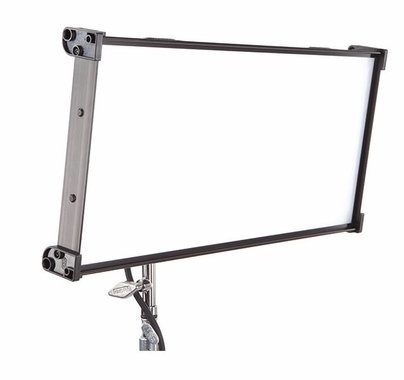 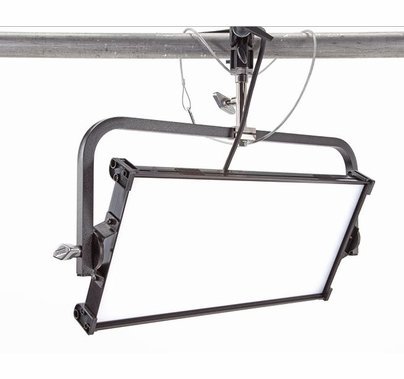 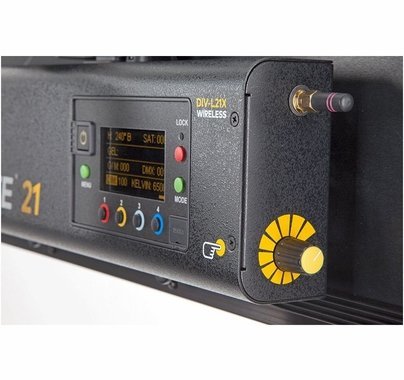 The Kino Flo Diva-Lite 21 LED DMX is another addition to the Diva-lite family and continues to be our most popular Interview and small studio fixture. Introduced in April at NAB 2018, its new form factor fits into a smaller travel case to save space for location work. It also provides a smaller profile for studios that have low ceilings. The Diva-Lite 21 comes as center mount with a carry handle or yoke mount option. Both versions feature four corner bumpers that can be used to hang from rope or wire. A honeycomb Louver (90° or 60°) is held in place with Velcro and gives direction to the light or can be easily removed to give broad coverage over the set.

The Diva-Lite 21s All in One design includes standard DMX in/out ports for cable as well as wireless DMX connectivity (Lumen Radio®). Additional specifications include universal AC voltage input 100-240vac (1.25 Amps at 120vac) as well as a 3-Pin XLR for 24vdc operation (6.25A).

Kino Flos Diva-lite 21 LED include 4 menu options, one white, two colors and FX menu. The White menu features include Dimming, Kelvin and Green/Magenta control channels. Dimming range is from .02 to 100 percent without introducing any flicker and can be adjusted in coarse or fine mode by pressing the control knob in/out. The Kelvin range is tunable from 2700K tungsten to 6500K daylight. The Green/Magenta control can be scaled from 0 to 100, where 25 = ¼ correction, 50 = ½ correction and 100 = full correction.

In the Gels/Hue menu, the Kelvin range is extended to 2500K Kelvin to 9900K daylight and a fourth channel is called Gel. The Gel channel includes Kino Flo presets such as blue & green screen, sodium vapor, mercury vapor as well as over 100 well-known lighting gels. The gel function can be applied to any Kelvin temperature and by pushing the control knobin/out, the gel will be applied or removed. A fifth channel called Hue Angle (Hue) and sixth channel Saturation (Sat) are also included in the gel menu. These two channels behave similar to a traditional color wheel, where white light is in the center and Hue Angle determines the color along a 360-degree range and Saturation determines how much color is applied. With the Hue Angle and Saturation it is possible to create over 2 million color combinations! 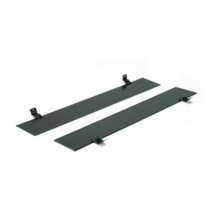