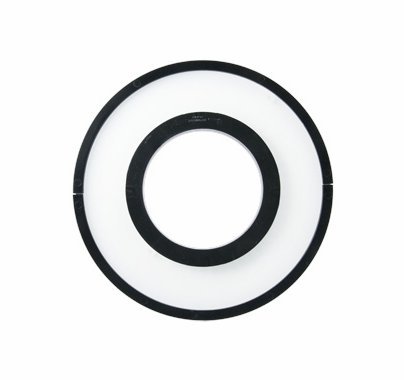 LitePad LoopÃ¢âÂ¢ is an innovative and unique approach to the ring light. Powered by the Rosco LitePad LED light engine, LitePad Loop is a soft, lightweight, daylight and powerful ring light that can work with virtually any camera and lens system. The ingenious, two-part design allows for quick and easy attachment to the camera while its soft, diffused light is ideal for close up photography - the mode for which ring lights were designed.

LitePad Loop is a sleek, easy to use ring light that produces a great quality of light. Loop is just over 9 inches in diameter with a 4.4 inch center hole. Its housing is manufactured in a durable, shatter resistant plastic. The LitePad inside the Loop has LEDs on both the inside and outside perimeters of the "O" shape, allowing for maximum brightness. LitePad Loop can be dimmed using either the optional Rosco Single Fader Dimmer or the 2 CH/DMX Dimmer.

The most innovative aspect of the LitePad Loop is how it attaches to the camera. On the back of the Loop is a set of high powered magnets that allow the user to quickly attach and detach the Loop from the mounting assembly.

The light engine behind Rosco's Loop is LitePad LED. The soft light quality of a ring light is extremely important as one of the key objectives is to reduce shadows, wrinkles and blemishes. And there are very few lights out there softer than LitePad.

The light engine within the Loop is Rosco LitePad, which is well known for its flattering, indirect light output. (Rosco's LitePad fixtures are widely used in film and video because of this quality.) One of the key objectives in using a ring light is to reduce shadows, wrinkles and blemishes - so, having a soft light source is an extremely important feature of any ring light. Rosco's Loop is the softest LED-based ring light available, thanks to its LitePad-based technology.

EASY ON THE EYES

Because ring lights are used so much in close-up photography, it's better to have a source that the subject can look at without hurting their eyes. Rosco's LitePad based ring light is comfortable to look into for long spans of time without causing eye strain or squinting, which allows the subject to look more natural and relaxed.

The LitePad Loop is so flexible and adaptable that it can work with almost every camera system without trouble - including all of the new DSLR cameras. The unique Mounting Assembly allows the Loop to maneuver into different positions on the camera and users can also quickly change from one lens to another with ease. The LitePad Loop Mounting Assembly is based on the industry standard 15mm rod support system, making it adaptable to equipment you might already own.

There is a wide range of power accessories that allow you and your LitePad Loop to go mobile. The Loop Mounting Assembly supports the attachment of Rosco's AA Battery Holder as well as third-party Anton/Bauer and V-Mount batteries. See the LitePad Loop Accessories page for more information. 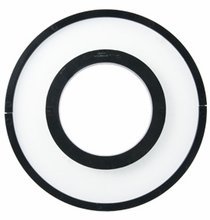